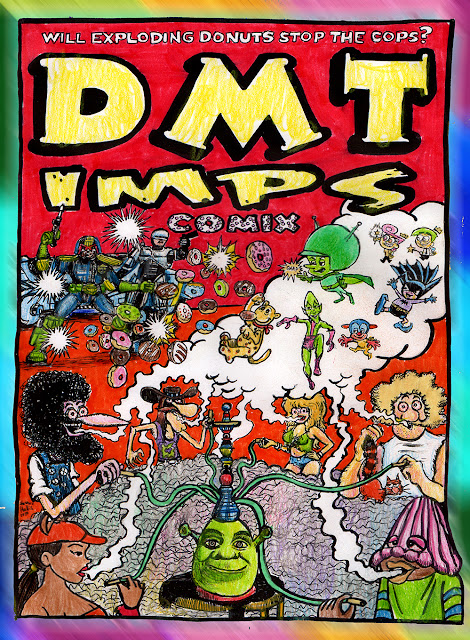 Being in quarantine you'd think that I'd try to make some profound and symbolic artwork to express the unprecedented horror of the times. The last thing I want to do is make some COVID art. Ugh. Enough. I'll leave it for the rest of the internet to make. Instead I got inspired by an idea I've had for a while about a Robocop and Judge Dredd team up where they're trying to bust The Freak Brothers. It didn't seem like a fair fight so I wondered how to make it more interesting. One thing led to another and this is what came out. Here's the premise:


Judge Dredd and Robocop are partners in law enforcement that fly around town beating and arresting hippies and non-violent criminals or killing them if they don't comply. But when they harass the Fabulous Furry Freak Brothers, Cherry Poptart, Dumb Donald (from Fat Albert), and Foxxy Love (from Drawn Together), they pick the wrong pack of stoners to screw around with. Using their magical Shrek Hookah, the gang smoke some N,N-Dimethyltryptamine to summon THE DMT IMPS! Terence Mckenna and other writers have published books about the interdimensional elves that you can contact with DMT, but the Shrek Hookah brings a special team of these entities into our reality composed of The Great Gazoo (from The Flintstones), The Jeep (from Popeye), Cosmo and Wanda (from The Fairly Odd Parents), The Gremlin (from Bugs Bunny), The Impossible Man (from The Fantastic Four), and Bat-Mite (from Batman). The DMT Imps immediately summon exploding donuts to launch at Robocop and Judge Dredd, distracting them long enough for our underground degenerates to escape! 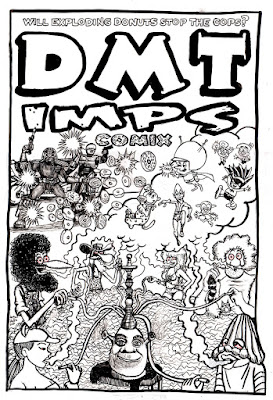