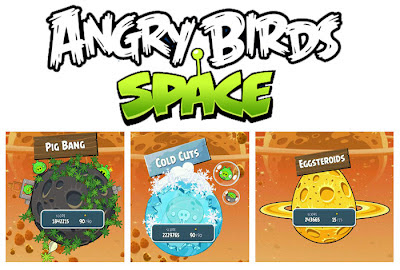 Posted by Howard Hallis at 1:27 PM No comments:

How many baby girls will be named Katniss or Renesmee in the next 10 years?
Posted by Howard Hallis at 2:54 PM No comments:

The Buyer's Guide For Comic Fandom #35

I love tracking down Dr. Strange stuff from the 60's and 70's I never knew existed...

This one is from the adzine that would later become The Comics Buyers Guide.

Artwork is by David Hunt. I made color corrections on the faded newsprint 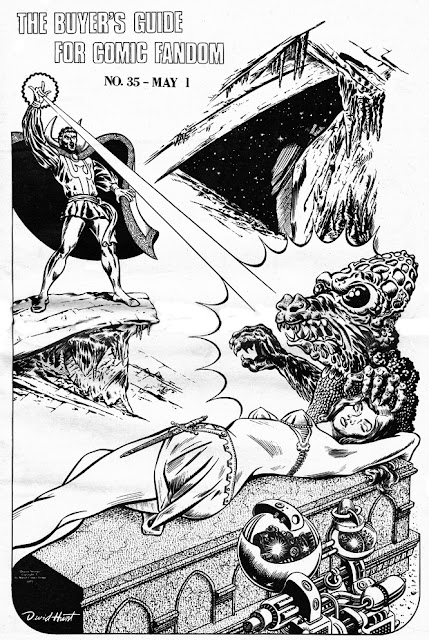 Posted by Howard Hallis at 3:02 PM No comments:

My wife Jesse on Conan O'Brien

The sketch she was in aired last Monday (episode with Ewan McGregor). She played Conan's mom in a flashback... 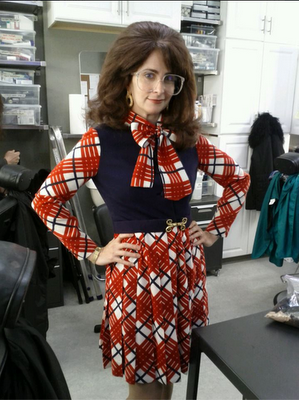 Posted by Howard Hallis at 10:47 AM No comments:

Happy birthday to my Mom 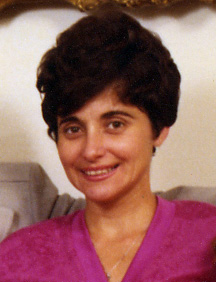 I love you and hope it's going to be a great year ahead!
Posted by Howard Hallis at 11:13 AM No comments:

THINGS I WILL PROBABLY NEVER HAVE IN THE DOCTOR STRANGE COLLECTION

Some of you out there may know that I have the distinction of having one of the two largest collections of Doctor Strange comics and collectibles on the planet. The other collection is owned by my friend P'Tor over at The Sanctum Sanctorum Comics blog, and he shares my pain.

Both of us go out of our way to collect every tiny little piece of merchandise that features Dr. Strange or some of his compatriots such as Dormammu, Clea, Wong and the Ancient One. You'd be surprised how much useless crap there is out there that must be consumed to feed the hunger. Although Dr. Strange isn't Spider-Man or Batman, there is a consistent barrage of items made available from the Mighty Marvel Merchandising Machine...

That being said, both P'Tor and I do pretty well in collecting the major stuff. But there are a few items that Dr. Strange has been featured in that are just too cost prohibitive or rare for me to obtain. Below is a list of my personal top 10 unobtainable grails: 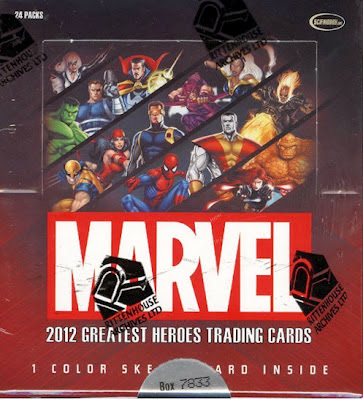 Doc is on the box and appears on a card within. I have the card and can't justify spending $70-$100 for the box art alone. (Amazon link)

9. MARVEL OMNIBUSES AND MASTERWORKS TITLES WITH DR. STRANGE ON THE COVER BUT NOT PROMINENTLY FEATURED WITHIN 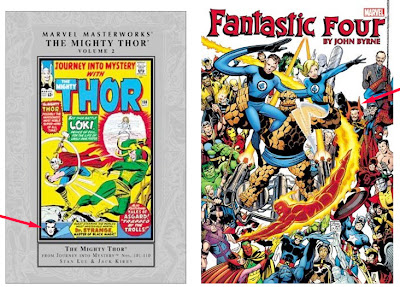 Sure... I'll get the Dr. Strange and Defenders titles, but the $60 Thor Marvel Masterworks that has a Doc floating head on the cover and features him in one issue? No way. The $100 Fantastic Four John Byrne Omnibus that has him in a Marvel group shot cover? Forget it.

Available in different colors too. $150? AAA! Dammit! No way in hell. (Amazon link) 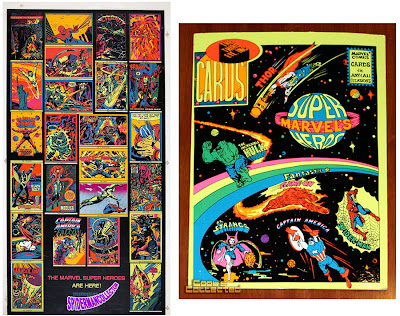 Two super rare display posters for the 1971 series of Marvel psychedelic blacklight posters and postcards put out by Third Eye. You won't find either one for under $500.

Almost got one of these but it was in the wrong size. (All my t-shirts are XL in the collection and I like to be consistent.) For the complete Stussy shirt saga, click here. These are extremely rare and had very limited press runs. Too bad. Nice shirts. 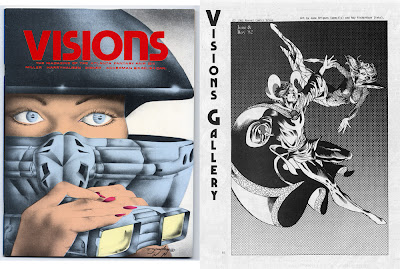 I used to own this comic. Only 3000 were made for the 1982 Atlanta Comic Convention and it featured the fifth appearance of Bob Burden's Flaming Carrot. I sold mine with my Flaming Carrot collection a few years ago and never expect to find another one. Sadly, it did feature a full page Dr. Strange and Clea drawing by June Brigman and Roy Richardson inside. 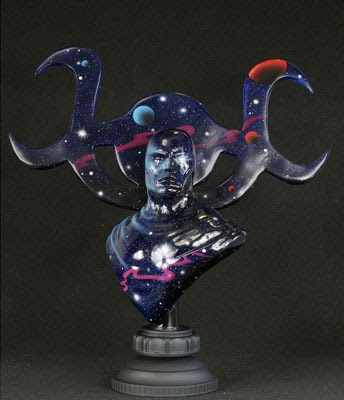 Last year Bowen put out this exclusive bust of the embodiment of the Marvel Universe, who made his first appearance in the Dr. Strange backup story in Strange Tales #138. One of my personal favorite characters from the series, the bust was an exclusive for Bowen sculpture subscription holders only. If you can find one, expect to spend AT LEAST $400 or more. 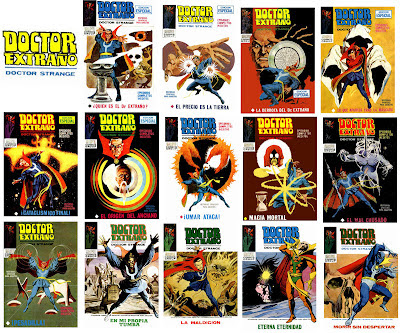 The art looks like beautiful vintage sci-fi paperbacks. I would need to go to a comic convention in Barcelona to track these down. Not impossible, but very very tough to think I would ever find even one, let alone a complete set. Published by Ediciones Vertice. Images from comics.org.

I see them from time to time on Comiclink or eBay and drool. Encapsulated and hermetically sealed Platonic-ideal copies of the first four appearances of Dr. Strange. 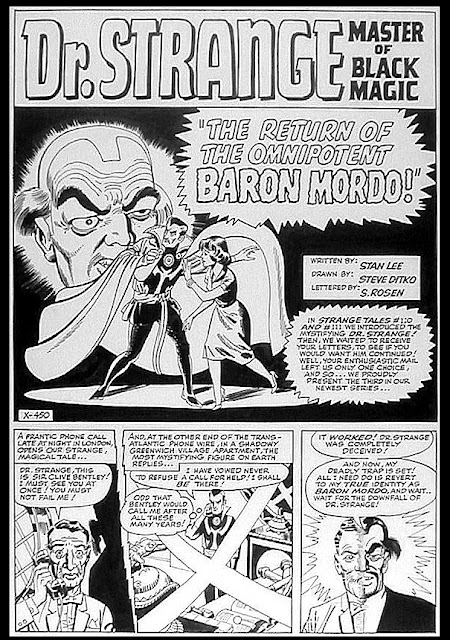 Maybe if I won the lottery I could afford to track down an original Ditko. You won't find anything he did for Doctor Strange or Spider-Man under $10,000. The one pictured here is owned by a guy named Stephen Fishler on Comic Art Fans and I bet it would fetch at least $75,000 if he ever decided to bring it up for auction. I read he has it up in his bathroom. Lucky bastard...
Posted by Howard Hallis at 9:41 PM 2 comments: 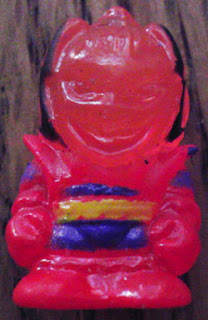 Posted by Howard Hallis at 12:20 PM No comments:

My friend Jay Tando, who recently played a cop with a bushy mustache in the LMFAO video for "Sorry For Party Rocking" (which as of the day of this post has been seen by 33 million humans), scored a comp for me to attend WonderCon yesterday (Sunday 3/18/12). Thanks Jay! I totally forgive you for any party rocking you might have done in the past and appreciate you volunteering to drive.
Usually held up in San Francisco, WonderCon was inexplicably held near Disneyland in Anaheim this year. About a quarter of the size of San Diego's Comic Con madness which I vowed never to attend again, it was just the right amount of people to make for a nice Sunday afternoon.
I ended up spending $80 I really didn't have to spend this month but did anyway. Here's my schwag:

Has the internet achieved consciousness yet?
Posted by Howard Hallis at 4:09 PM 2 comments:

Question for the Internet

Which science fiction story, saga, or mythology has been the most accurate in predicting what it's like to live in the early 21st century?
Posted by Howard Hallis at 12:03 PM No comments:

Email ThisBlogThis!Share to TwitterShare to FacebookShare to Pinterest
Labels: Question For the Internet

Posted by Howard Hallis at 11:02 AM No comments:

Ritual America: Secret Brotherhoods and Their Influence on American Society, A Visual Guide by Adam Parfrey and Craig Heimbichner is a sleek and comprehensive 340 page book filled with hundreds of amazing photos, illustrations and quotations about numerous secret societies. Included are Freemasonry and concordant bodies such as The Shriners, Prince Hall Masonry, Job's Daughters, Rainbow Girls, The Jesters, The Scottish Rite, The York Rite, and The Knights Templar, but the book doesn't stop there. You also get rare glimpses into the worlds of The Redmen, The Woodsmen, The Odd Fellows, The OTO, The KKK, The Owls, The Elks, The Illuminati and The Fraternal Order of Police, among many others. Quotations range from Albert Pike and Robert Anton Wilson to Lady Gaga.
As a Mason, it's interesting and eye opening (no pun intended) to read about the not-so-flattering skeletons in the closet that haunt the Fraternity. No punches are spared as the racist and sexist history of various Lodges is revealed for all to see. Despite all this, as an insider I see how far we have come when I look at the ethnic diversity in the Masonic community I interact with on a regular basis.
The book tries to be as objective as possible when presenting the various accounts from both pro and anti Masons within its pages, but can get pretty harsh when presenting the latter. Nevertheless, it inspired me to explore and question those unfavorable elements and that's a good thing.
I read every word and learned many things. I really recommend picking it up.
Posted by Howard Hallis at 5:08 PM No comments: 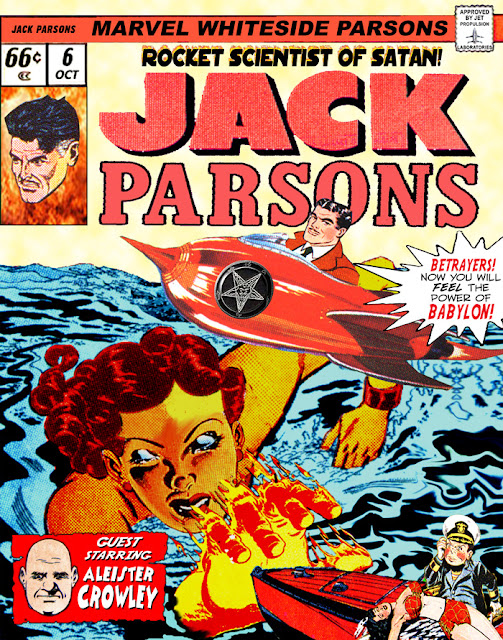 I made this one quite a few years ago around 2002. It's a digital collage made from a bunch of golden age comic book elements. For those who don't know who Jack Parsons is, I suggest reading his Wikipedia entry.
To see what this would look like in 3D, click here.
Posted by Howard Hallis at 4:30 PM 4 comments:

I hardly ever make more than one blog post a day.
Posted by Howard Hallis at 8:08 PM No comments:

Always look for variations in any routine.
Posted by Howard Hallis at 7:21 PM No comments:

For my EDSP 554 class at Cal State Los Angeles, I was asked to create a Schoolwide Positive Behavior Support Plan (SWPBS). Because this plan didn't need to be actively put into place but only conceptualized, I asked my professor if I could develop one for J.K. Rowlings' fictional Hogwarts School of Witchcraft and Wizardry from the Harry Potter novels and movies. What follows is a 34 page academic nerdfest you can download by CLICKING HERE or on the image below. 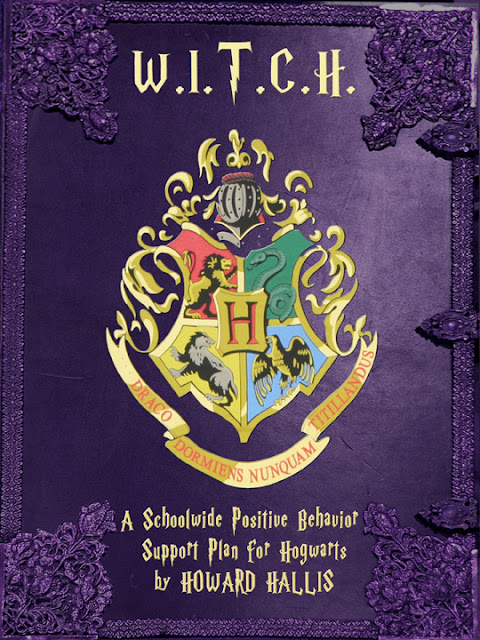 Posted by Howard Hallis at 1:55 PM No comments:

This is my lenticular piece that will be on display starting this Friday in the annual La Luz de Jesus Gallery group show.

Click here to see it a simulation of it in 3D! 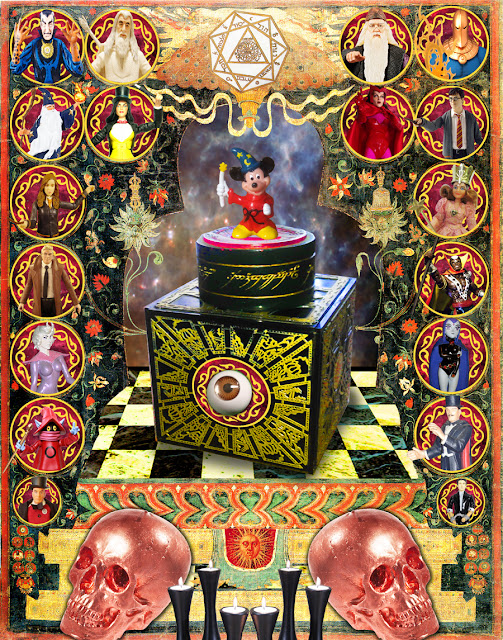 Posted by Howard Hallis at 3:56 PM No comments: